The RND Athletic Awards banquet was held on Wednesday June 14th in the cafetorium.  Here are some photos from a great evening of celebrating the Panthers.

The RND Baseball team was edged out by Holy Cross in the KASSAA Final.

Something special happened on the RND Pitch today; Regi, playing with only 13 players, defeated a full KSS squad with 15 players on the field. Since Regi was disqualified from competing in the playoffs, even though we have only lost one match all season, the boys knew that they had nothing to lose today. Our numbers have been steadily growing all year as that was the entire plan from the beginning; to grow the sport, as we went from 11 players to 16. With three players injured, we managed to start 13 players and told KSS that we would like to play against a full roster. With a chip on their shoulder, the Panthers played hungry and proved to be the better team despite playing short handed.
Tenacious play from our physical forwards like Goyette, Thiele and Duval prevented KSS from crossing the gain line. New players like Leeman, White and Galliah stepped up in a big way contributing real fire power to the squad. Big man Wyatt had a brilliant play carrying five opponents on his back before offloading the ball which led to a beautiful try. Quick thinking from Sutherland always kept Regi moving forward. But the play of Adam Mignault and Ryker Brunette really propelled Regi over their opponents. Every time those two touch the ball, they are a threat and they put on a real clinic today.
Overall, great effort this year Junior Panthers. I know you are all torn up about not being aloud to compete in the championships, despite a winning record. Use that fire to train hard and come back hungry so we can regain our KASSAA crown.

The RND Panthers knocked off the previously unbeaten KSS Bears in a thrilling penalty shootout. The Panthers fell behind 1-0 but stuck with their game plan and battled through the Bears to earn a penalty late in the second half. Captain Adrian Dagres buried it to even the score. The Panthers kept pressing with Dagres earning a second trip to the spot after another hard tackle by the Bears back line. Dagres made no mistake, giving RND a 2-1 lead. The Panthers held onto that lead for what seemed like forever as the clock kept moving. There was just enough time for the Bears to score an equalizer with under a minute left. Off to extra time, the game went with each team trading chances. Nothing found the mark though, and that send the game to a shootout. Dagres, Alex Reis and Lucas Cordeiro nailed their shots from the spot, while Tanner Hawkins kept the Bears to just 1-goal as the Panthers secured the victory. They will now move on to the KASSAA final, which is slated for this Thursday at Richardson Stadium.

The RND Panthers started off the 2022 junior boys soccer playoffs with a convincing 3-0 win over Mille-Isles on Tuesday. The Panthers dominated the game from the opening whistle with confident play from midfielder Adrian Dagres, who controlled the field throughout. The Panthers opened the scoring off a corner, when Ben Tassone smashed home a cracker of a shot from outside the 18. Centre-back Alex Reis took time off from shutting down the Coyotes attack, to move up and knock in a shot of his own to make it 2-0. Dagres ensured the Panther victory with an impressive individual run forward and clinical finish. Tanner Hawkins was flawless once again to secure the clean sheet. The Panthers got contributions from players up and down the line-up including winger Abraham Zeray, who gave Mille-Isles fits on the right side. The Panthers now move on to a semi-final match right after Victoria Day weekend.

The Junior boys rugby team had a memorable first home game. The boys team has been working hard and improving with every practice. The team has been growing in numbers throughout the season too. Finally, today was their first home game on the RND Pitch. The first half saw some jitters and good back and forth play. Big runs by Ben Goyette and Wyatt Pereira helped advance the boys and pressure Frontenac's defenders. Quick thinking and play by scrumhalf James Sutherland helped spring Adam Mignault for RND's first try on home turf setting the Panthers up for a 7-0 lead at half.
Then, early in the second half, Gavin Thorp and Alex Duval had a literal brainstorm session as they collided together on the field. Some tense moments and rides to KGH put a damper on the game. The good news is that the boys are both okay and now have matching scars that will bind them forever. They both displayed toughness and courage during a stressful afternoon. All in all Panthers, you all should be proud of your efforts today as you represented Regi well. Hang your heads high and be proud of your 2 and 0 start to the season.

With the first home game in over two years, the RND Senior Panthers didn't let the opportunity go to waste as they controlled the match vs Frontenac from start to finish in a 30-0 victory. Dominant play by our forwards in the first half set the tempo for the second as our backs had space to score at will. Huge shout out to Owen Golob who had a hattrick of tries. Additionally, hard worker of the game goes to birthday boy Ethan O'Brien and Champ of the Match goes to the human wrecking ball Jason Hastie. Well done Regi. Rest up for Tuesday match vs LSS.

This season Regi has been searching for stiff competition to battle harden them up and they found it in Ottawa. The team drove up to Ottawa and played a tough team on a cold and wet day. The Panthers played with passion and committed whole heartedly to the match, but at the end of the day learned that sometimes the calls, bounces and luck just doesn't go your way. However, a loss like this, at this time of year will prove to be incredibly valuable as it brings the boys down to earth and shows us what it takes to compete at an elite level.
Special shout out goes to men of the match Nick Villeneuve and Nick Saber. Both were relentless in their efforts and played a very physical game. Overall, a lot to be proud about boys. Keep those heads high.
Next match is Thursday, May 19th vs Frontenac. 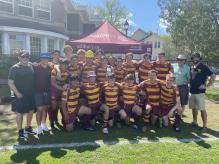 The Senior Boys Rugby team is celebrating an overpowering win against Ashbury College.

The RND Junior Boys Soccer team found its form in a strong 3-1 win over a solid group from Mille-Isles. The Panthers opened the scoring when Bradley Anselmo fought through a questionable tackle to sick the ball into the back of the net. The Coyotes evened the score off of a wild deflection, but the Panthers kept battling and earned a penalty that was slotted home by Adrian Dagres. The Panthers closed out the scoring on a confident strike by midfielder Nicolas Benavides. The Panthers finished the regular season in fourth place. They will start the KASSAA playoffs by hosting the Coyotes in a rematch on Tuesday.

This game has been two years in the making. Two years players had to wait to pull on the garnet and gold jersey and finally, the day arrived. The boys played hungry. The Panthers displayed high level skill, structure, and team work. Everyone was involved with the 30-10 win over NDSS today and the philosophy was realized that we are only as strong as our weakest link. And that link proved to be very strong. Special shout out to Hardest worker of the game: Jackson Lafontaine and Champion of the game: Isaac Coles! Now, it's time to get set for our next match set for May 14th in Ottawa vs Ashbury College Prep School.

Junior Rugby Off to Strong Start

What a GAME! The junior rugby boys, playing their very first match of the season against Napanee, came out hungry and ready to play. The Panthers won the match 32-5.The team was lead by team Champion Ryker Brunette as he proved to be relentless in his pursuit. Strong play was observed by everyone as many positives were on display. Hardest worker of the game, Adam Duval was tenacious in his tackles and general play. Overall, an excellent start to the season.

The RND Junior Boys Soccer team looked very strong in an impressive 4-0 win over NDSS. The Panthers got two goals from Lucas Cordeiro and singles from Adrian Dagres and Nicolas Benavides. The Panthers had to battle through some tough tackling by the Hawks who were on the wrong end of three cautions. The back line was very strong once again, led by the play of Cooper Barrie, Alex Reis and Aaron Prince. All three were strong in the air and quickly turned back any attempts NDSS made at attacking the Regi goal. Lucas Bruder picked up the clean sheet. The Panthers are now off for the weekend, but will return to action on Monday against LCVI.

The RND Junior Boys' soccer season got starting with a convincing 5-0 victory over Lasalle. The Panthers controlled the play from the opening whistle with strong midfield play by Ben Tassone and Daniel Mates, keeping the opposing goalie busy. Adrien Dagres had a memorable start to his KASSAA soccer career as he netted a hat trick. Lucas Cordeiro and Gavin Hope got the other goals for the Panthers. Goalie Tanner Hawkins picked up the clean sheet. The Panthers don't have much time to rest, as they will take on the KSS Bears tomorrow afternoon at the Brother O'Gara Field.

Duttle Leads the Way vs. Crusaders

The RND Panthers were great at times and the Panthers were a bit sloppy at times. Despite overcoming some serving struggles, the Panthers pulled off a 3-1 match victory over the Holy Cross Crusaders. Left side Mackenzie Duttle played her best game of the year in leading the Panthers to victory.

After a long awaited return to play, with excellent enthusiasm both on and off the court, the RND Jr. Girls volleyball team came through with a win Thursday night against LCVI. Excellent serving runs from Rocio and Anna, sparked a come back in the fourth set. Well done girls!

The Senior Girls volleyball team found itself down a couple of key players in their game vs LCVI but fought hard to take a 3-1 victory. Middles Alix Cordeiro and Madeleine Farrell scored all match while rookie Anna Mills passed well in her libero debut.